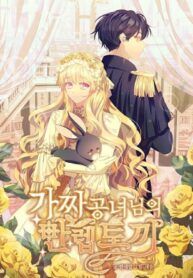 “The Duchess of Gernoa de Lantera,” attracts attention from high society. But she’s a fake! Her real name is Larissa. A girl who used to run street vendors in the market for families in poverty.
She was sold to a duke by her family, to play the part of his dead daughter, and is living in danger.
A rabbit with black fur in the arms of a fake duchess.
That rabbit is fake too! The rabbit is Grand Duke Hadelund Strelitz, who is admired by everyone on the continent. He is the master and hero of the Grand Duchy, where the beasts from hell reside, but he is now a cute rabbit because of a spell.
The Grand Duke, who happened to be saved by Larissa and received her care, naturally learns about Larissa’s situation and secretly helps her.
Larissa, who is being forced by the Duke to seduce the prince and marry him to become the future Queen of the country, and Hadelund, who increasingly came to know her worth, became interested in her. The encounter becomes fate and Larissa’s life begins to change once again.