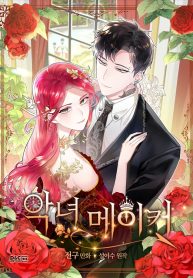 I reincarnated into a romance fantasy novel written 10 years ago.
On top of that, I became the villainess, Ayla, who cursed the female lead and was killed by the male lead.

Then, won’t it be enough if I don’t become a villain?

“I’ll live this life playing around like a jobless millionaire!”

However…
Before long, the days began to repeat
because I didn’t act like the original villainess, Ayla.

“Please stop Ruph….”
“The solution is simple. Become a real villainess.”
“A real villainess?”
“Riches, power, glory and men, you can have everything. If you want, you can even steal the crown and place it on your own head.”

The seemingly dangerous and mysterious man spoke sweet, demon-like words into my ears.

Can Ayla really become a real villainess in order to stop Ruph?

Villainess maker, the devil’s captivating class to create a real ‘villainess’, has begun.

The Chef Hides His Blessing

Elixir of the Sun